2020 is a very unusual and stressful for most of us. The covid pandemic, depressed oil prices, and now racism issues in our society have combined to disrupt everyone’s lives. We remain optimistic that things will improve going forward.

Here in Alberta, the campgrounds finally opened up for campers on June 1st. One June 7th we were out for the first time. We have several trips planned for this summer, all relatively close to home as interprovincial and international borders remain closed or restricted.

Finally, our first trip of the season. The covid-19 pandemic started 3 months ago and the first wave is under control so the campgrounds were reopened on June 1st. Provincial and national borders are still partially or fully closed so we will be sticking to Alberta destinations this year, at least. We missed camping and fishing on Tess’ birthday for the first time in many years.

Last month I replaced the flooring in 7 from the bedroom doorway forward to the windshield. I am pleased with the results. With an extra layer up front, the engine noise is reduced too. Camper hates the vinyl plank floor because he gets no traction and can’t jump up onto the couch or my recliner. We’ll have to get an area rug for him. Yes, he rules our lives!

I also installed a new toilet and did the usual maintenance on the mechanical bits. New blinds and shocks will have to wait until next year though because the fridge and hot water tank have decided to only work on 110 volts and the step isn’t locking into position when it extends. (see below) I’m sure they will all be expensive to fix.

We got underway about noon and it rained all day, sometimes heavily. Carson Lake is higher than usual, as expected. We settled into our site, levelled, and opened the slides and awning. I opened the door and the steps extended as usual but there was a bang at the end like something broke. They no longer locked into position so something did break I put a block of wood under them for temporary support. As mentioned, the fridge is now AC power only so we wound up with popsicle soup, but no other food was ruined. We will be able to freeze the fish we are going to catch.

One thing about an older RV, there is always a list of things to be fixed.

It rained well into the night so we didn’t fish at all today. No campfire either. There is no TV signal out here so we listened to the radio and read the evening away. 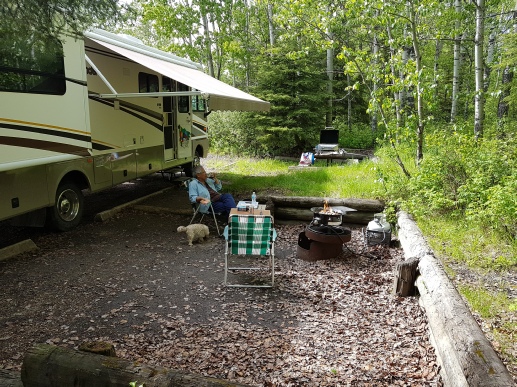 As forecast, the rain stopped by the time we rolled out of bed. We had 2 neighbours yesterday and now we have 3. Tess took Camper for a walk and found lots of fishers on the seawall but no fish coming in. There several class C motorhomes up top so the peninsula loop is about a third full.

Tess and Camper went fishing just as the sun came out. They came home later but without a fish. Not really surprising with the weather change.

We had an early dinner, the bbq one we usually have on the first day. Then I tried my luck fishing but had no bites in nearly 2 hours. I did have a curious squirrel visit.

Back home I lit a fire in the propane fire pit and settled down to read. There are lots of birds singing and I heard a woodpecker tapping away looking for his dinner.

The hot water heater made some odd noises when trying to run on propane. Basic troubleshooting showed no bugs or crud and the circuit board seems to work as it should. Partially blocked propane supply line? I’ll get at it when we get home.

There are only 2 empty sites in this loop now. Since it is mid June, it doesn’t get dark until nearly 11:00pm so people are out walking their dogs quite late. Weather is forecast to be better tomorrow. Hope the fish start to bite. 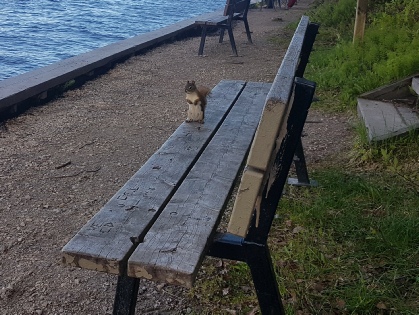 Tess caught a nice little rainbow and I caught a sucker today. Tess will have her trout for breakfast tomorrow morning.

While were fishing, Camper was laying on a bench. There was a bag of chips beside him but he was a good boy and left it alone. A squirrel was visiting the fishers next to us and they shooed it away. It came over to us and hopped up onto the end of Camper’s bench. I think he spotted the chips and just went for it. Camper just sat there and watched him. Strange dog.

Other than that bit of excitement, it was a nice camping day: relaxing, eating, walking the dog, and visiting with the neighbours.

We were all set to face the day by noon. For breakfast, Tess enjoyed her trout and I got bacon. Mmmm, bacon. We spent several hours fishing off the seawall but got skunked. A teen fishing for suckers with a pickerel rig and worms caught two suckers at the same time. Twice! First time I’ve seen that.

Several of our neighbours left today. We never spoke to them so I don’t know if they were in transit or just wanted to get out of the house for a couple of days. The entire campground is reservation only this year so it will be an unusual season for us.

We had showers today and the electric hot water tank was up to the task. Excellent. A quick trip to town for some odds and ends then back home for a fire. Later we watched a movie then bed.

Today I finally caught a trout, and a big one at that. I’d say 2 lbs. Tess had to cut it in half to fit in the frying pan so she was happy. We had a nice relaxing day.

After dinner at about 9:00pm the Conservation Officer came around and told us we should have left this afternoon and the next campers had called him. They had found a vacant site to camp in for the night. My bad, obviously. We apologized and promised to be out before noon. And we were gone by 11:00am.